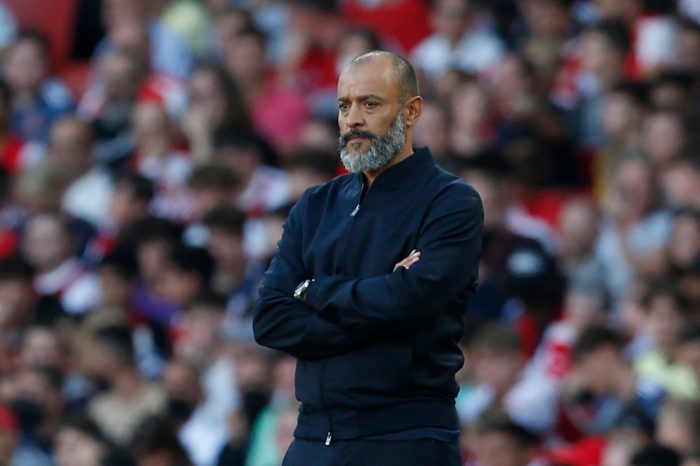 Arsenal celebrated their win at Emirates stadium with goals from Smith Rowe, Aubameyang, and Saka, all netting in the first half before a late Son consolation goal for Spurs.

Arsenal won the North London Derby with a dazzling display of first-half football at a sun-drenched Emirates Stadium to blow Tottenham away on Sunday. They came into the game off the back of three successive wins, and with confidence returning, immediately stamped their authority on the game.

With Granit Xhaka, Thomas Partey snapping into tackles, Pierre-Emerick Aubameyang fired up and made his presence felt. Arsenal unsettled the visitors all over the park. Roared on by an incredible atmosphere inside Emirates Stadium, they took the lead with a goal made as Bukayo Saka assisted Emile Smith Rowe.

Thomas Party saw a goalbound shot palmed around the post by Hugo Lloris, but the Spurs goalkeeper could do nothing about the second. Xhaka did well to turn out of pressure on the edge of his area, launching a slick counterattack involving Martin Odegaard, Kieran Tierney, Aubameyang and Smith Rowe.

Aubameyang played the opening goal scorer into space with a superb flick. Smith Rowe raced into the area before cutting the ball back to Aubameyang to finish left-footed. It was a reward for team performance full of endeavour, energy, and quality.

Smith Rowe collected the ball in the first half and played the ball into space on the right for Saka. The England international raced at goal, and after being tackled by Harry Kane in the area, the ball broke gently for him, and he slotted low beyond Lloris to make it three nil.

The visitors struggled to mount a response before the interval. Although Kane did head inches wide from a corner, they did pose more of a threat after halftime. Aaron Ramsdale had to be alert to palm away a Kane shot. Minutes later, the England captain lifted a shot over Aaron Ramsdale, but it drifted wide.

Arsenal came from the back, with the irrepressible Saka cutting in from the right and calling Lloris into action again with a curling shot. Son pulled one back for the visitors towards the end, but it did little to take the gloss off a fine afternoon.

On Sunday’s match loss, it is challenging to disagree that something is wrong at Spurs. The day after, Tottenham Hotspurs Stadium put on a spectacular show for Anthony Joshua vs. Oleksandr Usyk. Their football outfit was dealt with a knockout blow of 3-1 defeat against their most hated rivals down the Seven Sisters Road.

Today it was possible to point the finger of blame at almost anyone from the Lilywhites, with perhaps goalscorer Heung Min Son, the only player who could hold his head up high at full-time. The defence was slow to react to danger, while goalkeeper Hugo Lloris felt he could have done better for the third goal.

Lucas Moura mastered the art of looking busy but ultimately doing little. Harry Kane looked like he’d rather be almost anywhere else and for a figure who has been prolific in this fixture over the years to have such a quiet day. Tottenham have conceded 3+ goals in their three consecutive English Premier League matches for the first time since September 2003.

None of the Spurs players was able to take charge, and that lack of character is not eradicated no matter what they try. And then there is a man on the sidelines, Nuno Espirito Santo, who spent the majority of the match with his hands in his pockets staring despairingly into space. He took in the blame by telling Sky Sports the game plan and decisions he made were not good.

The Portuguese Football Manager has not implemented any clear playing style. Even though the Spurs won their consecutive opening three games of the season, it seems like they were riding on luck. Making it up as they went along, relying too far heavily on the counterattack. Bryan Gil was a rare bright spark in the match, and one has to question why Nuno has not used the young Spanish winger more. Spurs fans will be more patient with Nuno than they were with their former Manager, Jose Mourinho.

The main guilty party has to be Daniel Levy’s ride for optimism that Mauricio Pochttino built. However, he took his eye off the ball, refusing to invest in a squad for reinforcements instead of focusing on off-field commercial opportunities.